Technical Soccer Coaching offers a specialist professional soccer training programme open to all players who want to master the game and be the best.

Run by Professional Academy coach Ian Yuill, Technical Soccer Coaching is the culmination of his expertise both on and off the pitch. With 15 years experience training at Premier League West Ham United FC and 10 years operating TSC, Ian Yuill is a seasoned player and coach who was scouted by Hammers legend Ronnie Boyce, who was a key part of John Lyall’s coaching staff, along with Mick McGiven and England’s foremost developer of youth talent, Tony Carr, MBE. Ian has gone on to coach players at every level; from grassroots to Premier League pitches.

TSC was born out of the frustration that Ian felt when listening to the criticism of England in the 2010 World Cup, claiming England’s lack of technically skilled players were at fault for its failings, he saw a gap for specific training. He knew that these players existed, but it would take something extra to get them game ready.

More than just fancy footwork, Technical Soccer Coaching’s bespoke programmes will teach you how to translate these skills into game day scenarios, igniting your innate ability to think quickly on your feet and make the right decisions that will win the game.

With hardwork, repetition and passion, ball manipulation and technique can be mastered. Engraining these practices into training sessions, especially from a young age, gives the player the best toolkit to express themselves stylistically and effectively. They can become better equipped to make hard, tactical decisions in a game day environment.

Using a 6 step pathway that is guaranteed to make you an excellent technician, TSC has curated the skills and exercises needed to take you one step further- a game ready technician.

I was known as a maverick technical player for West Ham in the 90s, I fully appreciate the need for a dedicated technical training programme that allows young players to express themselves. As having coached alongside Ian many time in USA, I have seen the benefits of this training and how the programme influences players to be the best they can be first-hand.

Technical Soccer Coaching has produced highly technical, creative and confident soccer players around the world and at every level for 10 years. Our methodology focuses 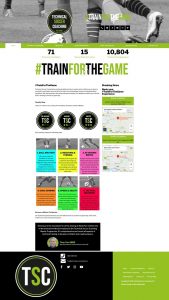 Welcome to the new Technical Soccer Coaching website. Our first new website in 10 years. There is more information about our technical soccer training and

We are delighted to announce the re-brand of Technical Soccer Coaching after 10 years with the previous style. The new green and black colour scheme